By Ramona MidkiffMarch 7, 2022No Comments 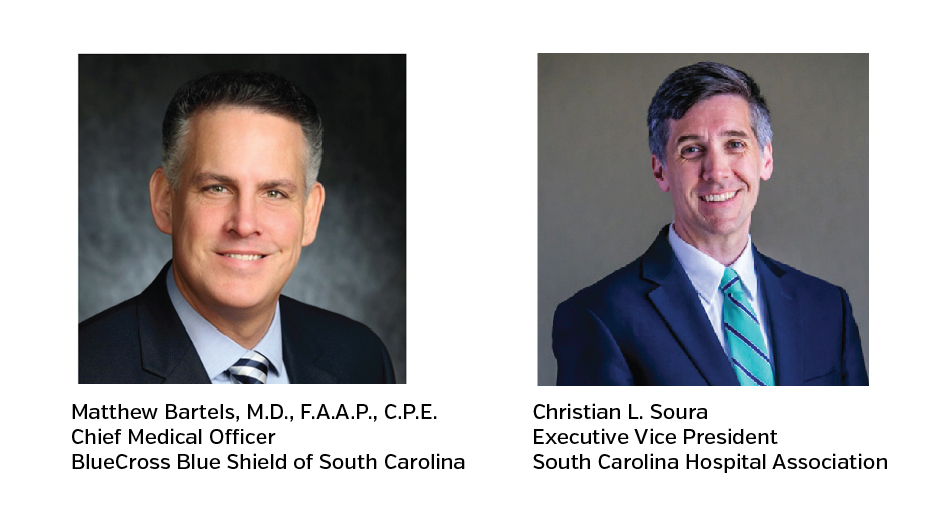 “Palmetto Care Connections is extremely fortunate to have the expertise of Dr. Matt Bartels and Christian Soura as new members of our board of directors as we work to assist health care providers in keeping health care local and connecting rural and underserved South Carolinians to quality services through broadband, technology and telehealth,” said Kathy Schwarting.

Dr. Matt Bartels has served as vice president, chief medical officer for BlueCross BlueShield of South Carolina since 2017. He is responsible for oversight of the clinical content of commercial insurance programs and initiatives, and he plays a key role in driving health and outcome measurement requirements and program evolution.

Board-certified in pediatric medicine, Dr. Bartels practiced for over 20 years and has worked in health plan administration for the last 17 years. Prior to coming to S.C. in July 2017, Dr. Bartels was in a leadership role at Excellus BlueCross BlueShield in New York where he was a chief medical officer with a focus on quality program development, population health, analytics and reporting, provider partnership collaborations, and innovative health care improvement activities.

The PCC Board of Directors also welcomes Executive Vice President of the South Carolina Hospital Association Christian Soura. He previously led the South Carolina Department of Health and Human Services and was president of the National Association of Medicaid Directors. Earlier, he was deputy chief of staff for Governor Nikki Haley, with responsibility for the state’s executive budget and the administration’s policy initiatives.

Soura is a former secretary of administration for the Commonwealth of Pennsylvania and was chairman of the Pennsylvania Employee Benefits Trust Fund Board, Pennsylvania’s largest group purchaser of health insurance.

He holds graduate degrees from Penn State and the University of Illinois. Christian is the chairman of the Nurse-Family Partnership’s Board of Directors and has held leadership positions in professional associations including the National Association of Medicaid Directors, National Association of State Chief Administrators, and the American Society for Public Administration. He also served on South Carolina’s Commission on National and Community Service.

PCC co-chairs the South Carolina Telehealth Alliance, along with the Medical University of South Carolina, serving as an advocate for rural providers and partnering with organizations to improve health care access and delivery for all South Carolinians.