By Ramona MidkiffAugust 18, 2020No Comments 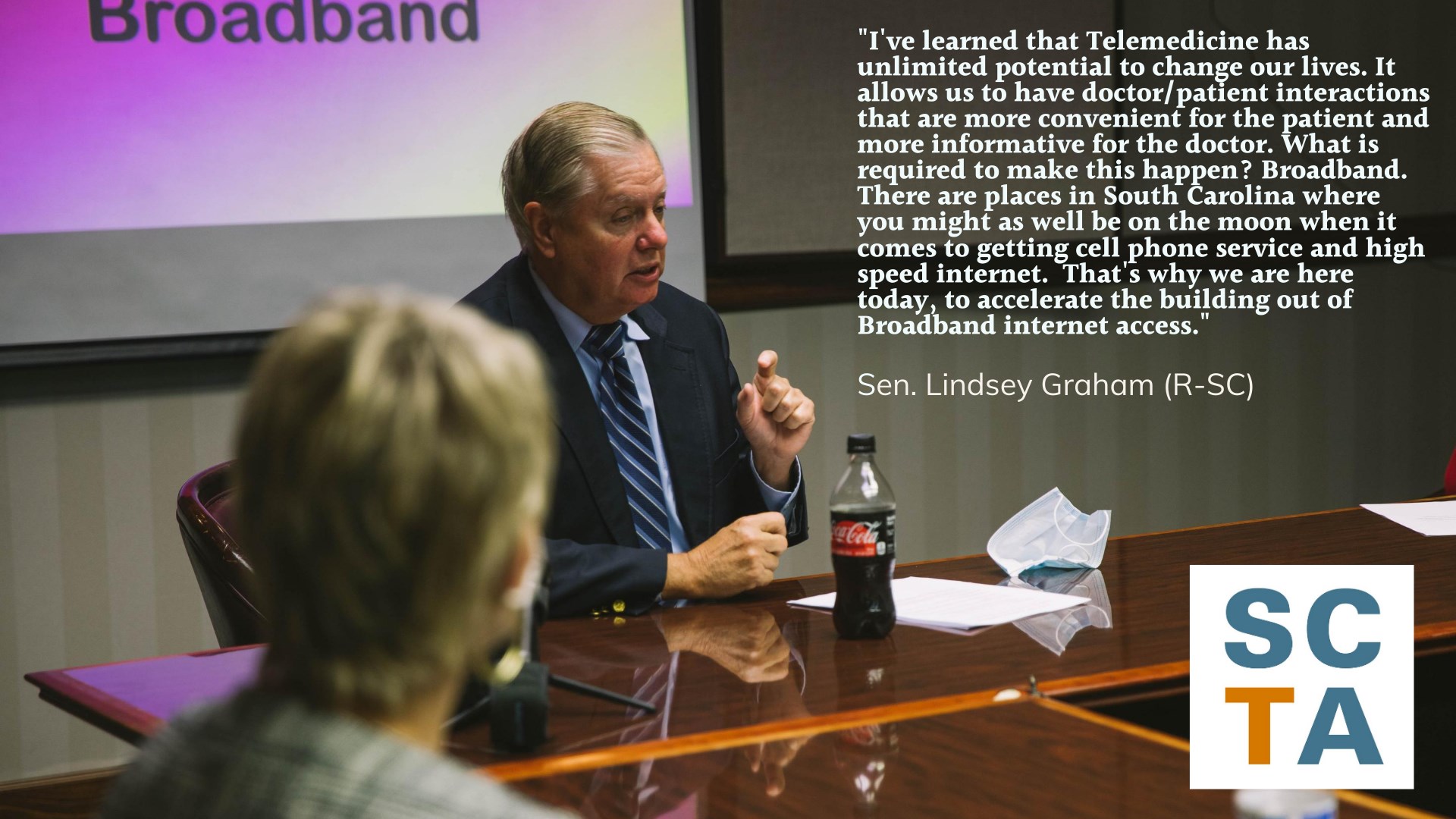 U.S. Senator Lindsey Graham met with medical professionals at the USC School of Medicine yesterday to discuss the benefits of improving access to broadband Internet and the expansion of telemedicine throughout South Carolina.

“I’ve learned that Telemedicine has unlimited potential to change our lives. It allows us to have doctor/patient interactions that are more convenient for the patient and more informative for the doctor. What is required to make all this happen? Broadband. There are places in South Carolina where you might as well be on the moon when it comes to getting cell phone service and high speed internet.”, Sen. Graham said.

The boardroom at Prisma Health’s Columbia office was brimming with state health advocates and politicians eager to find a solution to what has become a digital divide between urban and rural areas and along socioeconomic lines, making it difficult for some citizens to obtain quality healthcare. This divide has been an ongoing healthcare issue but has recently come to the forefront amid the COVID-19 pandemic.

“A wake-up call has descended upon the nation after the Coronavirus in a couple of areas, one of which is Telemedicine. A lot of people can’t get out of their homes for different reasons. A lot of seniors, people with mental health issues. The bottom line is: we can actually, through technology, reestablish a doctor/patient relationship that is incredibly personal. They tell me that about 20-30% of patient interactions today could be done just as well through a telemedicine platform as an actual office visit. And as technology improves, so can the interaction,” said Sen. Graham.

This week, Senator Graham and Senators Mark Warner (D-Virginia) and Tim Scott (R-South Carolina) will introduce legislation to allocate $10 billion to help governors across America speed up the deployment of broadband in areas where there is the greatest need. Senator Graham anticipates that South Carolina would receive roughly $170 million out of the overall fund.

Nationwide, there are 21 million Americans who do not have access to the FCC standard for high speed Internet with 650,000 of those living in South Carolina. According to Senator Graham, this grant is an emergency measure aimed at increasing access this fall to Americans who either live in a coverage dead-zone or are unable to afford service.

“This, to me, is an absolute medical essential requirement. Can you imagine living your life today without electricity? If you don’t have broadband, in many ways, you’re just as much in the dark in the 21st century as you would be if you had no electricity in your house. So here’s my goal: to get some money in the next stimulus package – and I believe we’ll have a breakthrough – that will expedite the delivery of broadband access to rural and urban areas that are basically dark,” said Sen. Graham.